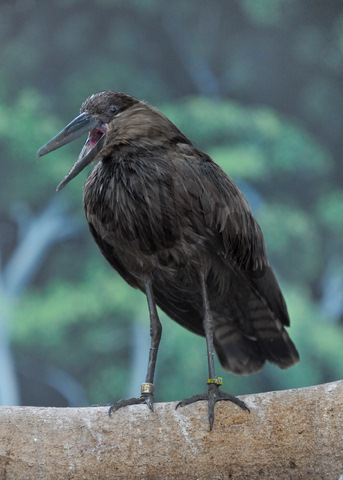 I thought I’d end the month with this photo I took recently. Talk about attitude!

In case you’re wondering, this is a Hamerkop (also known as a Hammerhead, Anvil Bird, and Umber Bird, among other aliases—wonder what he’s running from). I photographed him at the Denver Zoo, where he was making quite the racket. Apparently the noise-making was somewhat unusual, as they are usually pretty quiet.

These are really strange birds. According to Wikipedia, my favorite source of potentially correct information, “One unusual feature is that up to ten birds join in ‘ceremonies’ in which they run circles around each other, all calling loudly, raising their crests, [and] fluttering their wings.” Reminds me of my high school football team.

If that isn’t weird enough, consider their nesting habits. It would seem that Hamerkops are really into nests. Using perhaps 10,000 sticks, they build a huge edifice more than four feet across. The sticks, cemented together with mud, are formed into walls and covered with a domed roof. This bird mansion is accessed by a tunnel, also mortared with mud, and decorated with the latest in colorful objets d’ art. Then, as if this nest wasn’t impressive enough, they go on a construction spree, building nest after nest, sometimes up to five per year. And they do this whether or not they need them for raising a family!

I can just see the society page of the Hamerkop News: “The party will be hosted by Commander and Mrs. Hammerhead, of Madagascar, Arabia and Uganda.”

At least their compulsive nest-building serves some purpose. The surplus accommodations are quickly claimed by homeless families of birds, snakes, and small mammals.