Frequently I find myself viewing God as a serious, “it might hurt but it’s good for you” kind of guy. That is certainly one aspect of his personality. He is a Father who loves enough to discipline, who has called us to a life of service and selfless love, who asks us to sacrifice everything for the greater good that is the salvation of our souls.

But sometimes God reminds me that he also delights in giving us good things. While he values our sanctification above our temporal happiness, He takes pleasure in giving us good gifts. Our recent trip to California certainly qualifies as a wonderful gift.

We had entertained vague notions of spending a week or so reconnecting with friends in Silicon Valley, bringing supporters up to date, and maybe squeezing in a bit of much-needed R&R in the green California springtime. Apparently, God thought this was a good idea. When we were offered a pair of “buddy passes” on Alaska Airlines (enabling us to fly stand-by for a substantial discount), we quickly accepted, and scheduled the trip.

Not having the resources to pay for a rental car, a week of motel rooms, or much of anything else, we wondered how we were going to accomplish our goals, but again, God blessed. We were offered the unlimited use of a late-model Camry, complete with every luxury feature imaginable. Friends signed up to house and feed us. We were humbled and grateful at the outpouring of generosity!

The first weekend was filled with God-ordained appointments, leaving us much encouraged. We caught up with people we’ve greatly missed. The unceasing rain wasn’t a problem, since we were focused on people, not the scenery. But what would we do on Monday, when we switched from people-visiting to birding, photography, and other outdoor activities?

Monday dawned mostly clear, and we headed south to Salinas and a birding hotspot. While we could see dark clouds in every direction, the rain held off just long enough to spend several hours hiking and birding. Bird after bird showed up to pose for my camera lens. In fact, it seemed as though God was showing off His creativity to a very appreciative audience!

Just as the drops began to fall, we continued on to Monterey and Pacific Grove. Again the clouds parted, seemingly just for us. And again, the birds lined up to be photographed. There is no way I could have arranged that! 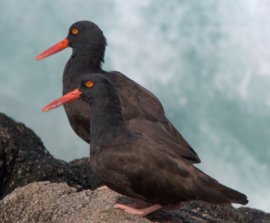 As we meandered south over the next few days the pattern continued. Rain at night. Rain while we drove. Rain in every direction except where we were hiking and taking pictures. And the specific birds I really wanted to see and photograph—a California Thrasher, a Black Oystercatcher, shorebirds and sparrows—all ready and waiting for my arrival.

Things got a bit more “exciting” when we got back to Sacramento to visit one more family and return the borrowed car. We had planned to fly on Sunday, to be home in time for a college class I’m taking, plus we both had meetings and other responsibilities Monday morning. However, when we checked how full the flights were, most were either full or overbooked—not what you want when you’re standing by for empty seats. So we decided to cut our trip short by a day and fly home Saturday.

God had other plans.

The line at the check-in counter seemed abnormally long, and we quickly discovered why. Alaska Airlines had suffered a huge computer crash on their operations system early that morning—an unprecedented event. As a result, they were unable to process flights. By the time things were straightened out later that day, 160 flights had been canceled, including ours.

Of course, with so many ticketed passengers wanting to travel, it would be several days before us stand-by peons could hope for a seat. We would be hanging around Sacramento until Tuesday.

There’s no point in getting riled about something beyond our control. I was mostly curious to see how God would work out such a major change in plans. And again, the blessings poured down.

The family hosting us was incredibly gracious. No one murmured about our overstaying our welcome, or being two extra mouths to feed. In fact, when we offered to take them out to dinner, they insisted on paying for it! They helped me find the resources I needed to complete a project due as soon as I would get home. They took me birding. They included us in their son’s 15th birthday celebration. We felt like part of the family.

God took care of things in Colorado, too. Because the Alaska mess made the news, my class instructor sympathized with my extenuating circumstances, and will give me more time for a take-home test and assignment. Pete’s meetings have been rescheduled. A wonderful friend took my 89-year-old dad out to lunch and made sure his needs were taken care of.

One of the birds I had really wanted to see was a White-tailed Kite. I’d gotten a glimpse while we were near San Diego (enough for a definite ID), but I hoped for a better look. The other bird at the top of my list was the endemic Yellow-billed Magpie. (While we have plenty of magpies in Colorado, they all have black bills, and are a different species.)

On Monday we borrowed the car yet again and headed off to find the magpies. Where to go? We found a list of natural park areas on the internet, then prayed and picked a destination pretty much at random. It turned out to be a lovely area, a greenbelt along the American River.

Roads and parking lots were scattered throughout the park. Pete asked me which way I wanted to go. How could I know? Neither of us had ever been there before! “Turn right here.” “Go down to the next parking lot.” I directed his driving by some sense of “this feels right.” And then… “Stop!!”

Looking up, I’d spied two large pale birds in the very top of a tall, leafless tree. What could they be? Then… “Oh! God, You didn’t…! They are!” A pair of White-tailed Kites were staring down at me with glowing red eyes. I could scarcely believe it.

I quickly hopped out of the car, grabbed my camera and tripod from the trunk, and set up to take photos. Take a picture. Sidle closer. Take another picture. Advance a few more feet. Take yet another photo, closer each time. They let me get close enough to fill the frame with their gray and white plumage. Finally, a jogger ran right by the base of their tree, and they took to the air. By then, I had my dream shot.

I spent another few hours birding and taking photos while Pete ran a few errands. Then we set off to continue our search for the elusive magpies. After several more stops, we’d pretty much given up. We were heading home on the freeway when I saw a familiar black-and-white form flapping across the lanes of traffic. A magpie! “Follow that bird!” I called to Pete.

We took the next exit, then drove around a few blocks, but no magpies. “Maybe there’s a park near by,” I suggested. GPS comes in handy, and we drove to the local patch of grass and playground—and a live oak full of Yellow-billed Magpies! I know God was grinning as I took my photos.

Now we’re sitting at our departure gate. We had a bit of a anxiety when the counter agent couldn’t find our names on the stand-by list. Then she realized that the airline had made a “mistake” and given us actual seat assignments all the way though to Denver. Thank you, God! It’s time to go home.