Then Pilate took Jesus and had him flogged. The soldiers twisted together a crown of thorns and put it on his head. They clothed him in a purple robe and went up to him again and again, saying, “Hail, king of the Jews!” And they slapped him in the face.

Once more Pilate came out and said to the Jews gathered there, “Look, I am bringing him out to you to let you know that I find no basis for a charge against him.” When Jesus came out wearing the crown of thorns and the purple robe, Pilate said to them, “Here is the man!”

John 19:1-5 (and I highly recommend
reading the rest of the chapter)

Easter Lilies have come to symbolize the resurrection of Jesus, but for Good Friday, I find the Crown of Thorns to be more appropriate. The pretty red flowers are deceitful. The rest of the plant is a collection of horrors. 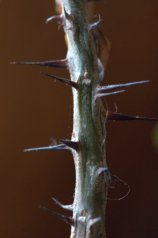 Legend has it that this is the actual type of plant used during the crucifixion. It’s quite possible, as it had already been brought from its native Madagascar to the Middle East by that time. The stems, which can reach six feet in length, are covered with very nasty 1-inch thorns. If they haven’t been recently watered, these ropey stems become flexible enough to weave together.

As if the thorns aren’t bad enough, the Crown of Thorns would be a particularly cruel choice of for another reason. As the scientific name indicates, Euphorbia Milii is first cousin to other Euphorbias, including poinsettias, the wide variety of spurges, and Snow on the Mountain. All these species share common characteristics such as inconspicuous flowers surrounded by showy bracts, and a toxic, thick, milky sap. This latex can not only cause skin irritation, but if it comes in contact with a mucous membrane, extremely painful inflammation can result. Some species’ sap is carcinogenic. According to the University of Illinois, even honey made from the flowers may be poisonous.

I realize that the pain of having thorns shoved into your scalp and forehead palls compared to being crucified. It’s just one more way that Satan displayed his loathing of Jesus. But I grow this plant in my house, and I’ve stabbed myself more than once while pruning and repotting it. It’s ones part of the story that I can easily identify with—just a small taste of what I am missing because of Jesus’ love for me.

One thought on “Thorns”