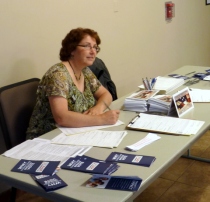 Last Sunday Pete and I helped people register to vote. We always vote in elections, and we enjoyed encouraging others to register as well. Our church had several tables set up around the hallways and café area, and our small group volunteered to provide the manpower. We had a short training talk, and then headed out with our clipboards, forms, and big smiles.

Most of the people we talked to were already registered. Others had recently moved and needed to “re-up.” It took all of five minutes to fill out the form, sign their name, and become eligible to vote in the upcoming election.

What surprised us, however, were the approximately 5% of people who refused to register or vote. As I pondered their various reasons for not voting, I began to wonder. Should Christians vote? Is it important? Does God care one way or the other? I did some research online and found that, like many issues, this one is a bit controversial. Here’s my opinion. I’d be interested to hear what you think, as well.

Voting wasn’t an option when the Bible was being written, so it’s no surprise that the word “vote” isn’t found in scripture. However, many verses give us a clue that voting is a Godly thing to do. For example, we are called to be salt and light in our culture. Praying over the candidates and issues and then voting according to conscience and the promptings of the Holy Spirit is a way to directly impact our society.

Or, read through the Old Testament—1 and 2 Kings, for instance—and see how much God cares about the character of government leaders. Good kings led their people to God; bad kings introduced idolatry that resulted in God’s judgment. We’re in the privileged position of having a say in who our rulers are. Shouldn’t we attempt to sift through the hype and spin to discover which candidates have at least a shred of integrity? And if you believe that none of them do, then at least vote against the worst ones! We need to stand against evil in any way possible.

You might think your vote doesn’t matter, but that isn’t necessarily true either. We live in Colorado, which is happens to be a swing state in this election. Colorado Springs and most rural areas are predominately conservative, while Boulder and Denver are very liberal. Which candidate gets our nine electoral votes could be determined by just a few ballots.

One half vote average per precinct in 1960 gave John F. Kennedy victory over Richard Nixon. One vote or less per precinct decided Averell Harriman’s gubernatorial election (1954), George McGovern’s Senatorial campaign (1960), and John Warner’s Senate race (1978). And remember the 2004 election, when Bush lost the popular vote but won the presidency? Florida voters ended up being critical to the results.

Choosing a candidate to vote for (or against) is a big deal this year, but the presidential election isn’t the only item on the ballot. Propositions, other public offices, and amendments to the state constitution are all decided by an election. I believe my Christian worldview speaks to these candidates and issues.

First Corinthians 10:24 tells us that “No one should seek their own good, but the good of others.” One way we can do good to others is to vote for candidates and laws that help other people.

We are held accountable for how we use the resources available to us. Our vote is such a resource—a gift that has been purchased at great price by the men and women of the armed forces.

Finally, not voting has just as much impact on an election as voting. The lack of your vote matters. We might say that we don’t like either candidate, and we don’t want to be responsible for electing them, but by not voting, you simply abdicate your responsibility, and give that much more influence to others—with whom you may disagree.

The final day for voter registration is Tuesday, October 9, which is 30 days before the November 6 election. You can register in person at the DMV, or download a registration form or register online at your specific state’s website. Just Google “register to vote online [state]” to get started.

Do you intend to vote in the upcoming election? Why or why not?

One thought on “Register and Vote!”