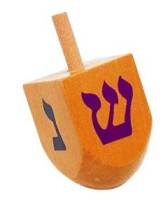 We’ve owned a dreidel for years, but I’ve never had a clue what to do with it. It seems that we’ve been missing out on some fun. A dreidel is actually the essential piece of a gambling game! Traditionally, the game is played for chocolate coins rather than real money. Still… chocolate!

If you read my post on Hanukkah, you know that there was a period of time just before that event took place where practicing the Jewish religion was illegal. Of course, that didn’t stop the Jews from teaching their children about their heritage, and about the God who chose them to love.

According to tradition (and Wikipedia), the children would be out in the woods, learning the Torah, and hiding from the authorities. However, that looks a bit suspicious, so when anyone came along, they would quickly pull out a top and spin it. Now they just looked like innocent children playing a simple game.

That toy was the precursor to today’s dreidel. A dreidel is just a four-sided top. Each side is decorated with a Hebrew letter: נ nun, ג gimmel, ה hey, and ש shin (outside of Israel ) or פ peh (in Israel).

The four letters each stand for another word, and that’s the basis for the game. According to MyJewishLearning.com, in Yiddish…

The game starts with everyone putting an equal number of items in a pot. You can play with those gold foil-covered chocolate coins, small food items such as nuts or M&Ms, or even pennies—whatever you want. I’ll opt for the chocolate coins, but I sure wish I could get some that taste more like chocolate and less like wax!

Next, the players take turns spinning the dreidel. The player does whatever the letter on top says to do—either nothing, or put something in the pot, or take half or all out! If you run out of coins, at your discretion you can arrange a loan with another player. In any case, the game is over when one player has all the goodies. Now that I finally know how to play the game, I just need someone to play it with!

There are a number of traditions associated with the game. The Dreidel Song goes like this. There are a number of alternate verses—I have no idea which are the most authentic—but the tune is always the same. Be warned: listen once, and you’ll have it stuck in your head for the rest of the day.

If you don’t own a dreidel, there’s a virtual dreidel available online. You still need someone to play with, however.

I also ran across a really interesting Jewish website (Ohr Somayach) that offers a more involved look at the symbolism of the dreidel as it relates to the history of the Jews.

You don’t have to be Jewish to play with a dreidel. The phrase “A great miracle happened there.” can refer to an even greater event that took place about two hundred years after the miracle of the oil. God became man and was born into our world as a baby. In a few short years he would die for us so that we can share eternity with him. That’s the greatest miracle of all!