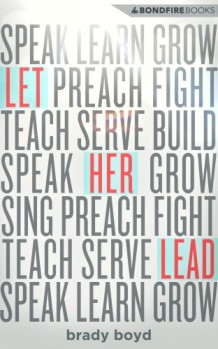 One of the most controversial subjects in the church today is the role of women. Should they be senior pastors? Are they allowed to teach adult Sunday School? What about teaching boys? Are women only allowed to work in the kitchen, change diapers, and knit baby blankets? Was Paul a misogynist? What does the Bible really say?

I’ve avoided this issue until now, but not because I don’t have an opinion. I do. I have a very strong opinion! But being of a personality type that abhors conflict, I just didn’t want to open a can of worms, female or otherwise. I’ve felt a lot like Moses at the burning bush—sure, I’ll have an opinion about this topic, but please get someone else to do the writing!

Well, God did just that.

I just finished reading Let Her Lead, by Brady Boyd. Yes, he’s the senior pastor of our church, so I was pretty motivated to pick up this book. (I was able to get an early copy of the just-being-released printed edition, but it’s currently available in electronic form from Amazon for a mere $3.03.) I knew what I believed about women and the church, but what did my pastor think?

At only 73 pages (plus the endnotes), the book is short. It really only has two chapters! I read it in one sitting. Tomes have been written on this topic, so it’s clear this isn’t an in-depth analysis. However, Brady makes his point clearly and supports it with scripture. In an “Afterward,” he even points out areas we’ll probably never agree on until we get to heaven and can ask God face to face.

Aside from one fairly minor point, I agreed with everything Brady said. I was astonished. While I think our Brady Boyd is a pretty wonderful pastor, I never expected our beliefs on such a contentious topic to mesh this well.

Even better, he explained his views so much better than I ever could. Now I don’t have to write a controversial blog post. I can just urge everyone to read this book. Sneaky of me, wouldn’t you say?

So, what does Brady (and I) believe? You get a hint from the title. I’m not going to tell you more, because I want you to read his book, and not just a checklist of opinions you can either agree or disagree with.

This book is written by a man, and it’s largely directed toward other men. That doesn’t mean women can pass it by. If you agree with his conclusion, then we women have a responsibility to act. It’s easier to sit in the back of the church and stay silent. Using our gifting requires us to take risks, to leave our comfort zone. It opens us to the possibility of failure.

I hope everyone reads this book. Whether or not you share his interpretations, this is a topic too important to disregard.

One thought on “Rocking the (Gender) Boat”

It’s Not Over Yet

The Worrywart & The Rearranger