Last week I wrote about entire cultures comprised of people who never get a chance to truly celebrate Christmas—because they’ve never heard of Jesus. There are over three billion people who live in these ethno-linguistic  groups, about 40% of the earth’s population. I also explained that of these people groups, there remain approximately 1,400 (around 568 with populations over 5,000) who are unengaged by the church. No one is yet doing anything to bring them the good news of God’s love.

It’s all well and good to make these lists and to bemoan the fact that after 2000 years, there are still entire people groups who are being left out of all our mission efforts. But awareness by itself accomplishes nothing. What can we do to change this situation? More importantly, what can I do?

The first, and possibly most strategic thing we can do is pray. Jesus told his disciples, “The harvest is plentiful, but the workers are few. Ask the Lord of the harvest, therefore, to send out workers into his harvest field.” (Luke 10:1-2)

And be warned that when the disciples obeyed Jesus and prayed, they were next told, “  Go! I am sending you out like lambs among wolves.” (Luke 10:3)

Prayer is effective. Often we feel that “all we can do is pray” when in fact prayer is what is needed most. Prayer puts God to work. I love this clear example from several decades ago:

In the early ’90s, missiologists were particularly concerned about the part of the world that is least evangelized, poorest, and most lacking in missionaries and other Christian resources—the nations of the 10/40 Window. This area of the eastern hemisphere, between 10 and 40 degrees north latitude, was previously called the “resistant belt,” and for good reason. Mission work tended to be dangerous and unproductive. Missionaries would invest their lives but gain few new believers.

In 1993, “Praying Through the Window” was launched. This initiative aims at gathering Christians all over the world to pray for the nations of the 10/40 Window. That year, millions of believers joined together to intercede for those trapped in darkness.

The results were astounding. Workers in these countries reported a sudden breakthrough and the number of new Christians skyrocketed.You can see the results in this chart from Every Home for Christ: 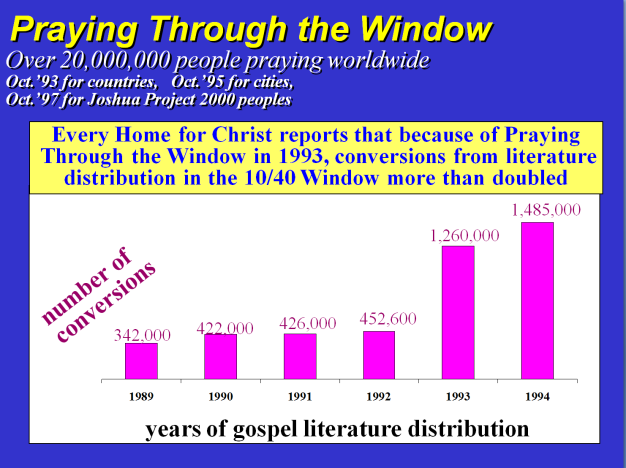 What changed? The only difference was prayer!

It’s easy to get involved. The Window International Network (WIN, the organization that hosts this initiative) has numerous suggestions on their website.

In order to pray effectively, it helps to know what to ask God for. Several organizations track the evangelized status of people groups, and provide supporting information to help you target your prayers. You’ll have fun poking around Joshua Project’s interactive site. Last week I pointed you to the lists of unengaged unreached people groups on the Finishing the Task Network website. Both these organizations are constantly updating their data based on the latest reports from the field.

Once we have committed to pray, our next step is to ask God how He would have us act. As we saw in the Luke passage above, very often God tags us as the answer to our own prayers.

Joshua Project lists five ways to get involved without leaving home. You can read their list online, but I’d like to highlight one suggestion in particular: Reach Unreached Peoples Around You. With international students and professionals (particularly in the high tech fields), and now the huge increase in refugees worldwide, all moving to the U.S., the opportunities have never been greater to befriend members of an unreached people group living in our home towns.

Another way to contribute your time and energy is to volunteer for a mission organization focused on unreached peoples. Be strategic and look for one willing to begin a work among an unengaged group. Even seemingly mundane tasks such as routine administrative work or cleaning offices can have an eternal impact. We can’t all be glamorous missionaries on the front lines.

Then again… some of us are called to go. Maybe you will be the answer to your prayer for more workers. Most missionaries are sent to areas with existing Christians, often with a thriving church. Only a tiny fraction pioneer new ground. Consider being like Paul, who said “It has always been my ambition to preach the gospel where Christ was not known, so that I would not be building on someone else’s foundation.” (Romans 15:20)

Then Jesus came to them and said, “All authority in heaven and on earth has been given to me.  Therefore go and make disciples of all nations, baptizing them in the name of the Father and of the Son and of the Holy Spirit, and teaching them to obey everything I have commanded you. And surely I am with you always, to the very end of the age.” (Italics mine)

As he points out, Jesus tells us to go. He doesn’t say, “Pray and ask me if you should go.” He doesn’t tell us to wait for a “missionary calling.” He simply says “Go.” In our pastor’s opinion, we need a special calling telling us to stay home!

Whatever you do, take action. What better Christmas present can we give Jesus, than to spread His glory to places where He is still unknown?