India. Complex. Overwhelming. Fascinating. It’s a land of flamboyant colors, intensely flavorful food, memorable odors. The city traffic is relentless—trucks, taxies, auto-rickshaws, buses, mixed with bullock-drawn carts and bicycles, motors rumbling, horns blaring. It’s a land of contrasts—city-blanketing smog comprised mainly of smoke from cooking fires, engine fumes and factory-produced dust, and blue skied villages; churches and idols; fabulous, bejeweled wealth dressed in business suits and silk saris, and too-thin families living under bridges or in back alleys. I can’t wait to get there, and I am relieved to go home again.

Last fall Pete and I once again found ourselves in India. Our first week was spent in New Delhi, where Pete was invited to attend a conference and I went birding. The second week was centered around Hyderabad, India’s “Silicon Valley” located in the south-central part of the subcontinent. We have friends there.

Dr. Vijayam is a former professor at Hyderabad’s prestigious Osmania University, where he was the head of the geology department. He received India’s highest National Science Award for his discovery of much of India’s gas and oil reserves. Once a Marxist, his desire to alleviate India’s suffering eventually led him to accept Christ. Since that day, he and his wife have reached out with the love of Jesus through dozens of rural development initiatives. It was this passion that led the Vijayams to establish Joshua Vision International’s King Centre at Carmel.

One of the highlights of our trip to Hyderabad was a visit to this church-planter training center in the near-by village of Kodapur.

Drawing from all over the country, the year-long program at Carmel produces young men and women whose life purpose is to train 100 other believers who will in turn each plant 100 churches. This is done over a year of full-time discipleship. The result is mature believers skilled in both evangelism and micro-enterprise. It’s a brilliant approach. Audacious? Absolutely—but it’s working! 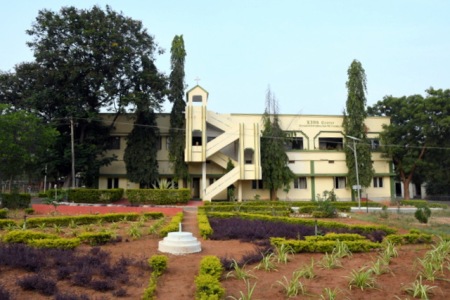 I had heard about Carmel for years, and was excited to finally get to see it for myself. We were housed in the guest quarters—an air conditioned room with an adjoining private bathroom. It was much more luxurious than the dorms, and I appreciated the hospitality.

Meals were in the common dining hall. We were seated with the other western visitors, presided over by Dr. Vijayam, and I could immediately see that we were being treated as honored guests. While everyone else ate white rice and lentils three times a day, we also enjoyed boiled eggs, bananas, vegetables, flaky chapattis—and one day we were even offered some chicken.

Each day began with a time of worship and Bible teaching in the little open-air chapel. It was fun to hear some familiar songs sung in Hindi and Telugu, as well as English, and reminded me that the first obstacle many of these students faced was learning an entirely new language. I was impressed by the depth of Biblical knowledge being presented, and wished I could participate longer than a few days. 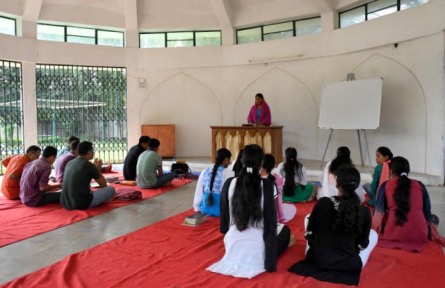 After a break, lessons continued in a classroom, covering topics as varied as theology, communications, and cultural anthropology.

A strategic part of the training is preparing the students to financially support themselves and their ministries. Curious, I wandered around the 11-acre campus. Bee-eaters perched on the overhead wires and flowers bloomed along the paths. One building housed a shop where students could gain skills in woodworking. Some students worked in a new orchard that had been planted next to a large vegetable garden. Chickens, turkeys, and geese filled a coop next to a dove cote. A cow stood in the shade of a partially enclosed barn; goats wandered outside. You can even enter a life-size replica of the tabernacle! We learned that some students trained as tailors, others in bookkeeping or screen printing. Dr. Vijayam’s creativity was endless.

The center operates as a partnership between churches and institutions from all the regions of India, as well as receiving donation from the United States. This is an excellent place to start if you want to impact the tremendous challenge that is India.