As I mentioned a few weeks ago, Pete and I celebrated our anniversary last month. (Well, technically, we haven’t celebrated yet—he was out of town at the time, and now I’m somewhat incapacitated  with an injured back. But we will be celebrating soon. I’m sure we will.)

In addition to the typical romantic dinner out, etc., we have a number of more unusual traditions that we enjoy when our anniversary comes around each year. We had a long distance relationship for our first year dating. This was before such conveniences as email, cell phones with free roaming, and the discovery of electricity. So we wrote letters and put them in envelopes and actually mailed them to one another. We still have those letters, and they’re fun to read and reminisce about how clueless we were back in the day.

Another thing we do is reread our vows to one another. We got married in the 1970s when writing your own vows was super popular. Ours grew out of a month’s long Bible study about marriage. It’s good to be reminded about what we promised that day.

The third way I commemorate our wedding is by reading a book about marriage/relationships. I do this even when it doesn’t seem necessary. I figure that it’s much better to head off issues before they become problems. Even after 38 years, I still have a lot to learn about being a better spouse.

This year, since I had some extra time (did I mention Pete was out of town?), I read two books. The first one is by perennial favorite Christian author Dr. Gary Smalley. As you might guess from the title, For Better or for Best: A Valuable Guide to Knowing, Understanding, and Loving Your Husband, this book is aimed at wives. Keeping with that theme, the other book I read is called I Wish He Had Come with Instructions: The Woman’s Guide to a Man’s Brain. It’s by Mike Bechtle.

Both of these books were very much worth reading. They’re well organized and accessible, long enough to contain plenty of meat, but without being overly wordy. Each point is illustrated by one or more example, making them easy to relate to. Best of all, both books are full of suggestions I can put into practice. I don’t have to wait for Pete to read the book. He doesn’t even need to agree on what needs fixing.

In fact, it’s impossible to play the blame game with these authors. Both of them put any responsibility directly on the reader. That’s not saying that guys are perfect and women always have to adapt to them. Rather, it’s realistically applying the truth that the only person I can change is myself. (I should point out that Dr. Smalley has also written a companion book for husbands, If Only He Knew.)

Smalley’s focus is on how wives can approach their husbands with understanding and a gentle spirit, which allows the husbands to respond positively in return. He points out that women are generally better at relationships, and men have to be taught how to love their wives. If they didn’t have a good role model growing up, they may not know how—and who better to teach them than the woman they’re married to? 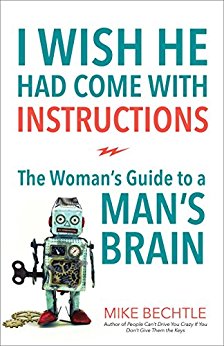 Bechtle, on the other hand, introduces us to the ways that men are different from women. Of course, in most ways, we’re more or less the same. But there are significant differences, and expecting a man to feel, think, and act like a woman is unrealistic. For instance, because of structural differences in the brain (men have more gray matter while women have more connections) we don’t think the same.

Also, women can both think and feel at the same time. Apparently, men can’t. (Who would have known?) We have different emotional needs as well. While women typically desire love and security, men want to be respected and admired heroes. Understanding these things about Pete helps me be more patient with things that have sometimes frustrated me. It helps to know what he can change, and what is hard wired into his male brain.

Of course, both of these books are addressed to men and women in general. Each situation and person is unique, and not all the points may apply to my circumstances. Still, I sometimes felt as if the author had a one way mirror into our home. I especially liked Bechtle’s chapter on “Why He Can’t See Dirt”—it explains so much!

While Dr. Smalley’s book is specifically aimed at married women, Bechtle’s applies to any woman who deals with men. That’s pretty much all of us. I definitely recommend both books. I only wish I’d read them sooner.

One thought on “Read These and Be a Better Wife”

Milkweeds: Not Just for Monarchs

A Pantone “Color of the Year” Garden

An Answer, and Another Quiz