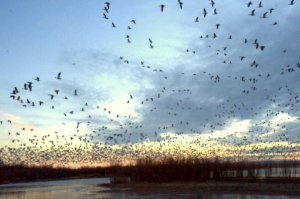 As you read this, Pete and I are off enjoying some much-needed R&R. More specifically, we’re at Bosque del Apache National Wildlife Refuge, an hour plus south of Albuquerque, New Mexico. Imagine 50,000 white Snow Geese, an undulating floe covering the waters of a shallow lake, then, with a tremendous honking and flapping of wings, rising en masse to fill the dawn sky. This has to be one of God’s most incredible spectacles!

Bosque del Apache is also the winter home for thousands of Sandhill Cranes, ducks, and other birds… and hundreds of birders and nature photographers. Our coming here was my 2012 Christmas present from my dad. It’s just what I wanted.

Last week, I was chatting with a friend as we panted side by side on some exercise equipment. She was excited because she and her husband had just bought new living room furniture. As I congratulated her, she explained how big a deal this was—growing up, her family had never bought anything new.  Their clothes, their cars, and  yes, their furniture all came from thrift stores or the want ads. Apparently, her father believed it was more spiritual to live with hand-me-downs.

I’ve encountered this poverty mentality elsewhere. Another good friend of mine was finally able, after years of scrimping and saving, to take a short cruise in the Bahamas. She and her husband work long hours as missionaries; they’re funded by donations. It had been over a decade since their last vacation, and they got a terrific deal on a last minute stateroom. But the response of their supporters was indignation! How could they spend money (it was all of $300 each, total) on a vacation? They were accused of being poor stewards, of wasting kingdom resources. It was heartbreaking. 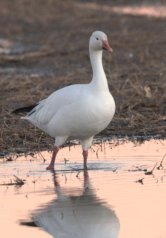 When Pete and I moved to Colorado, we prayed diligently over where to live. Should we buy a house? Which one? How much should we spend? Coming from Silicon Valley, we had some options, and we wanted to get this right. God eventually led us to the house we’ve lived in for almost 20 years now. Yes, it has a lot of square feet (4,000 to be exact) largely because of the finished “basement” area. We were actually reluctant to buy such a big house, but God was pretty clear it was for us. Well, that space has been used to start three different ministries. At one point, we had seven people (with desks, computers, etc.) working there! Plus we’ve housed a number of friends and church interns (at a year or more each), and now half the downstairs contains my home business. Yet, we’ve been scolded by other ministry workers for living in a large home.

Of course we all need to manage our finances wisely. There’s nothing wrong with saving money and buying things used. But is it more spiritual? Does God actually want us to be poor?

Maybe this is a backlash against the heresy of the prosperity gospel. Anyone who has their eyes open will realize that faith and obedience don’t always lead to health and wealth. But somehow many Christians, particularly those who work in vocational ministry, seem to believe that being poor is more pleasing to God. They take the admonition that Jesus gave the rich young ruler—to give all he had to the poor—and apply it to everyone.

I don’t think it’s that simple. Surely, God calls some to be poor, and they receive blessings in other ways as compensation. But God calls some to be wealthy—perhaps so they be givers, perhaps so they can reach other wealthy people with the Gospel. What matters isn’t how much we have, or how new it is, but are we doing what God tells us to do? Are we generous? Do we hold things loosely? Are we grateful for what we have? 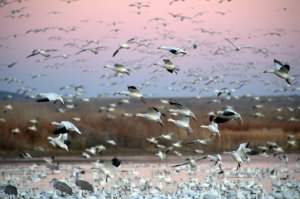 This morning, as I stood surrounded by 50,000 Snow Geese, I realized that God does not lack resources. He’s a God of abundance. When it comes to creation, he’s lavish. When it comes to loving us, nothing is too good for us. Yes, there are seasons of plenty, and seasons of need, but what is our attitude? Paul commented in Philippians 4:12,

Our job is to be thankful, whatever our blessings.