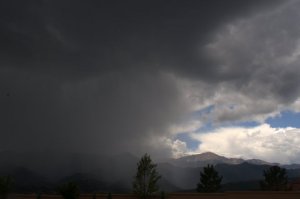 Where’s the rain? We haven’t seen a storm like the one in this photo for several years. In spite of our recent snow (finally!), Colorado, like much of the nation, is experiencing severe drought. Last year brought only half our average precipitation, and the preceding years haven’t been much better. With water rationing looming in the near future, we might be feeling a down. After all, who likes a brown lawn?

I garden for pleasure, to make my flower beds look attractive, and to provide fresh, healthy food that supplements what we buy at the grocery store. Farmers and ranchers, on the other hand, raise food for their livelihood—and so we’ll have something to buy at when we go shopping. A lack of water can be catastrophic, not only for their bank accounts, but for all of us who depend on their products.

A ranch southeast of town reported that last year they received only three inches of moisture—far short of their normal ten to twelve inches (which isn’t all that much to begin with). It was almost as bad in 2010 and 2011, with five inches per year. The native grasses are so parched, they’re dying. As a result, the ranch is selling their cows—and their chance for making any profit this year. They’re making a last-ditch attempt to save the shortgrass prairies, but nothing can protect vegetation the if rain doesn’t fall.

Water is used in manufacturing as well as agriculture. The cars we drive, the paper we write on, the clothes we wear—pretty much everything we use requires water at some point in its creation.

This chart was recently brought to my attention and I thought it so interesting, I wanted to share with you. I raise chickens, and I know that they drink more than, say, our cat. It makes sense—they lay liquid-filled eggs. But I had no idea that it takes anywhere near eight gallons of water to make my morning cup of tea!

Be sure to look over the entire chart. At the bottom you’ll find some suggestions on how to save water at home. Pete and I already eat more chicken than beef, and we installed low-flow shower heads years ago. I don’t plan to give up tea, but I’ll certainly appreciate it more (if that’s possible). Do you drink milk? What other steps can we take to conserve?