Turning off the main highway, our minibus bumped over the rocky gravel road toward Gege, Swaziland. Tree farms, with their orderly rows of pine and eucalyptus, gave way to grassy hillsides, cattle, and the occasional small cinder block building. I tried to snap some photos from the moving bus, with limited success.

About ten minutes into our 40-minute ride, we bounced past a run-down homestead flying a worn, solid black flag. Odd, I thought, and asked our missionary host what the flag signified. He explained that some Swaziland belonged to a cult that worshiped a nasty snake idol/demon, and the flag meant that a snake “church” met at this home. Apparently, Gege was the epicenter of this cult.

Our driver, a native Swazi, added that Gege was “cursed”—and the area was dying. Those who could, moved away, and many of those who remained died. It was an evil place.

I chewed on this information as we finished our drive. Physically the Gege area is lovely. However, the sense of spiritual oppression was so thick, I kept expecting to see dark shapes moving among the cinder-block homes and dry grass.

Later, I asked our team leader why no one had come against this evil spirit. After all, we have authority in Christ to cast out demons. Paul writes in 2 Corinthians 10:3-4,

“For though we live in the world, we do not wage war as the world does. The weapons we fight with are not the weapons of the world. On the contrary, they have divine power to demolish strongholds.”

Shouldn’t we be “waging war” against this unclean presence and “demolishing its stronghold” in Gege?

Our leader explained that direct confrontation would likely result in a spiritual backlash against our team and against the CarePoint, and that not everyone was spiritually equipped to deal with such an attack. Rather, we would come against this evil by operating in the opposite spirit. Instead of death, we would bring life. Instead of fear, we would bring praise. And instead of apathy, we would love.

Once we entered the gates of the CarePoint, the sense of evil dissipated. In spite of its surroundings, the Gege CarePoint is filled with the presence of God. 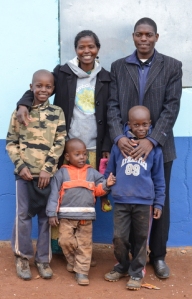 This spiritual climate is largely due to a missionary couple from Zambia. Pastor Ronald and his beautiful wife Esther (I kept thinking of her as Queen Esther!) left a comfortable life in Zambia to move to Gege, plant a church against seemingly impossible odds, and start a ministry to orphans and widows. (That ministry grew into the CarePoint, later “adopted“ by Children’s Hope Chest.) I was overwhelmed by the trust and joy emanating from this faith-filled young couple.

Probably the most significant lesson I learned on this trip was that evil doesn’t always have to be confronted directly. We had three “weapons” in our arsenal with which to defeat the enemy: prayer, praise, and love—and we deployed all three!

Most mornings we arrived before the school-aged children; there was only a small group of preschoolers already at the CarePoint. Most of the team was free to prayer-walk the perimeter of the CarePoint compound. We prayed for God’s presence and blessing over those inside, and for the repentance and salvation of the group of people living in tiny one-roomed houses next door—a group of mostly men who spent their days in a booze- and drug-induced stupor. We prayed for the acquisition of the abandoned hospital complex (a group of run-down cinder block buildings), which Pastor Ronald hopes to turn into an orphanage, school, and dorm-style missionary housing. 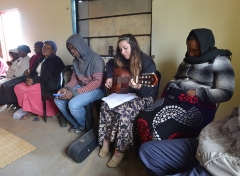 Several mornings, we also joined the CarePoint staff for a time of worship. We learned some Swazi songs (sung in English), and our worship leader played one of our songs for the Swazis. Then, later in the afternoon, all the children would gather for their Bible lesson and singing. And can they sing! No accompaniment was needed as over three hundred voices sang praises to God. Surely He was blessed by such an ovation—God truly inhabits the praises of His people. 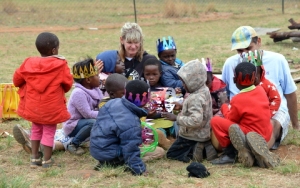 Finally, they may lack parents at home, but those children know they are loved at the CarePoint. Of course, our team spent most of our time playing with, sitting with, and holding kids. But the staff—a couple of teachers, Pastor Ron and Esther, and the go-gos (grandmothers) who did the cooking—also consistently demonstrate their love day after day, long after we left for home.

My most profound experience in Gege was being able to experience first-hand how an outpouring of love, prayers and worship is creating a small but steady beacon of light and hope in a dark and hopeless place.

2 thoughts on “Bringing Light into Darkness”