(This is the third article in a series on poverty. If you missed the previous two, please back up a few weeks and read those posts.)

Before we get any further, let me clarify some terminology. It turns out that sociologists use the terms absolute poverty and relative poverty, and it’s important to know the difference. According to the UNESCO website,

Absolute poverty measures poverty in relation to the amount of money necessary to meet basic needs such as food, clothing, and shelter. The concept of absolute poverty is not concerned with broader quality of life issues or with the overall level of inequality in society. The concept therefore fails to recognise that individuals have important social and cultural needs. This, and similar criticisms, led to the development of the concept of relative poverty. Relative poverty defines poverty in relation to the economic status of other members of the society: people are poor if they fall below prevailing standards of living in a given societal context.

A better definition came out of the UN-sponsored World Summit on Social Development in 1995. They defined absolute poverty as

… a condition characterised by severe deprivation of basic human needs, including food, safe drinking water, sanitation facilities, health, shelter, education and information. It depends not only on income but also on access to services.”

As you can see, the U.S. uses the concept of relative poverty—people are poor if they have fewer luxuries than the rest of us, and most of our poor have adequate food, clothing, and shelter. This is not true of the poor around the world.

The World Bank uses absolute poverty. According to their 2012statistics, 12.7% of people in the developing world lived at or below the international poverty line set by the UN of $1.90 a day. Yes, under two dollars per day. (It’s hard to imagine someone surviving on $5 or $10 per day!)

A daily income of $1.90 adds up an annual income under $694. Compare that to the US poverty line of $12,316 per year or less and you’ll see the difference a definition makes.

I’ve been to many of the world’s poorest places—India, the Philippines, Mexico, Guatemala, Swaziland—and I have seen many people living in poverty. Put yourself in their shoes (or, more likely, flip-flops):

You likely live in a cardboard shack, crowded tenement, or a hut with a dirt floor. You don’t have a door that locks, so you have no personal security. In any case, there’s little to steal—perhaps a change of clothes or two, your bed and blanket, a table and chair(s), cooking pot and water container, plus a few plates and cups. In the corner is a bag of rice and/or beans plus some spices and salt.

You might spend your days marketing extra vegetables or fruit you have grown, sewing or creating handicrafts, sweeping streets, selling incidentals from a small stall, cleaning homes and offices, driving the local equivalent of a rickshaw or “auto taxi.” Your employment generates just enough income to provide food for you and your family. If you’re more successful than most, you may even have an old TV in your shack; I’ve seen TVs in the most unlikely places! 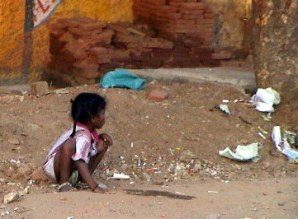 If you’ve been less than successful, you might find yourself living on the streets with no shelter at all. During the day you perform hard labor, carrying bricks, hand-digging basements—or graves. If you can’t work, you beg. You hope that you’ll bring in enough to buy some rice or corn for the day’s meal. And you do this day after day, year after year, until one day you don’t because you’re sick, or old. And then you die.

(If you want a heart-rending description of life for the world’s poor, I recommend you read Nectar in a Sieve, by Kamala Markandaya. It’s a 1954 novel about the life of a poor couple in India.)

There is good news for the world’s poor. The World Bank set a goal to cut in half the 1990 level of poverty by the year 2015. This goal was actually achieved five years ahead of schedule, in 2010! However, we still have almost a billion people trying to live on less than $1.90 per day.

What can we do to help?

While relief is always needed for emergency situations, providing food and clothing does nothing to alleviate the causes of poverty, and in some cases, tangible aid actually makes things worse. For example, an abundance of donated clothing from the US is driving some African seamstresses and tailors out of business!

Rather, development is critical. The UN has page after page of proposals, from political to economic to social to environmental recommendations that purport to solve poverty. There’s no way most of us can get personally involved with most of them, as they involve policy changes at a governmental level. However, there is something we can do to help, a way we can make a difference on an individual level. We can support micro-enterprise. More on that coming up next week.

It’s Not Over Yet

The Worrywart & The Rearranger