Common Death Adder. Tiger Snake. Taipan. Eastern Brown Snake. Belcher’s Sea Snake. Out of the ten most venomous snakes in the world, half are found in Australia. And how about the dangerous Australian snakes that didn’t make it into the Top Ten, like the Spotted Brown Snake, Mulga Snake (aka King Brown Snake or Pilbara Cobra), Red-bellied Black Snake, Collett’s Snake, or Highland Copperhead? It seems that Australia has far more than its fair share of dangerous snakes.

If you opt for a dip in the ocean, sea snakes aren’t the only lethal creatures you might encounter. The Blue-ringed Octopus, stonefish, lionfish (left), various cone snails, and box jellyfish are all potentially deadly. That’s if the sharks don’t get you—Bull Sharks, Tiger Sharks, or the infamous Great White. Man- (and woman-) eating saltwater crocodiles may be found in freshwater streams and ponds, as well as in brackish estuaries or the ocean.

You’re not even safe in the cities. The above-mentioned Eastern Brown Snakes hang out in urban areas, and at least a couple of spiders, most notably the Sydney funnel-web spider and Redback spider, are also deadly (although antivenin will save you).

The duck-billed platypus may look like a fascinating aggregation of animal parts, but it also has a venomous spur on each hind leg. The venom may not be deadly, but it will hurt—a lot. Do not hug. 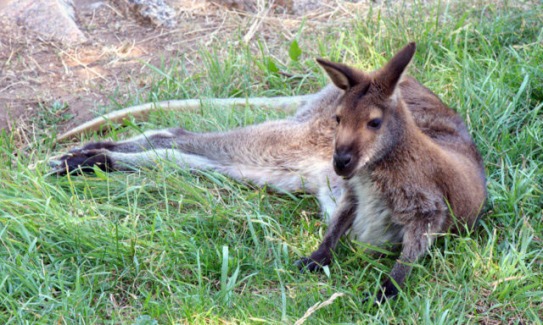 Even Australia’s plants are out to get you, and you don’t have to eat them to get in trouble. I was shocked to learn about the Gympie-Gympie, an innocuous-looking stinging tree found in Queensland’s Atherton Tableland. A brush with the poisonous hairs on its leaves and stems can leave you hospitalized for months of excruciating pain—and it’s only one of six species of stinging tree found in Australia, all members of the nettle family.

The sap of the milky mangrove can not only cause severe skin irritation, it can also (temporarily) blind you. So can the sap of various spurges (Euphorbia sp.).

Surprisingly, however, the most dangerous creature in Australia isn’t any of these—or the paralysis tick, Jack jumper ant, bull ant, or several other ant species. It’s the familiar honey bee. That’s because so many people are allergic to its sting.

Thankfully, most of these creatures are not very common, and injuries are relatively rare. That’s a very good thing, as we are off to Australia. We also plan to come back in one piece.

In the meantime, due to anticipated technical constraints (lack of internet in the rainforests, etc.) and personal availability (I plan to be out taking pictures of the plants, marsupials, birds, and all other things Australian), I likely won’t be posting much over the next few weeks (although you never know). I’m taking a vacation, and you can too.

I’ll tell you all about it when we get home.

One thought on “… after a while, crocodile”

PlantSelect® is for Colorado