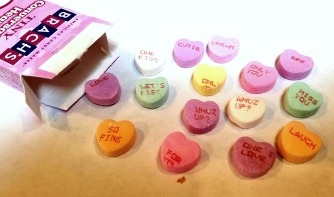 What says Valentine’s Day better than a box of conversation hearts? I have happy childhood memories of opening my sack lunch and finding a box of candy with sayings such as “BE COOL,” “TRUE LOVE,” and of course, “I ♥ YOU.” My friends and I would share giggles over “MARRY ME” and “FIRST KISS,” and assumed that “PUPPY LOVE” affirmed our affinity for young dogs. 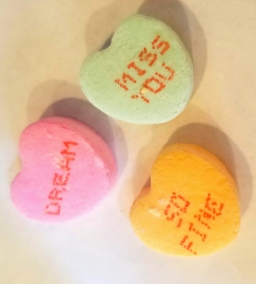 It has been years since I’ve munched any of these candy hearts, but since we’re visiting our granddaughters for Valentine’s Day this year, I bought a few small boxes to take with us. To get photos for today’s post, I had to open one early (gee darn). I expected the same old sayings I grew up with, such as “DIG ME,” “OH YOU KID,” and “HEP CAT” (which seemed out of date even in the 60’s), but surprise—like everything else, they’ve evolved with the times. Today’s hearts now sport phrases such as “BFF,” “TWEET ME,” and “WHAZUP,” as well as a happy face.

Conversation hearts were invented back in 1866 by David Chase, who came up with a machine that could imprint letters onto candy wafers, using vegetable dyes. If you think they taste like NECCO Wafers, that’s because they were manufactured by Mr. Chase’s brother, Oliver, founder of NECCO (the New England Confectionery Company). Originally, phrases were printed on candy disks with scalloped edges. The heart shapes debuted in 1902, and the rest is history. 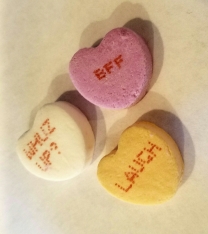 Back in 1866, no one would have considered putting “GIRL POWER,” or “TEXT ME” on a candy heart. What were those original sayings? The first printed candies were much bigger than the current versions, and had room for entire phrases.  “MARRIED IN WHITE YOU HAVE CHOSEN RIGHT” and “HOW LONG SHALL I HAVE TO WAIT? PLEASE BE CONSIDERATE” are two examples.

In order to stay current, a quarter of the phrases are swapped out every year. Some years, the additions share a common topic. “COOL CAT,” “TOP DOG,” “MY PET, LOVE BIRD,” and “U R A TIGER” are some examples from the animal themed year of 2007.

A newer version in Spanish reflects our changing demographics. This year, I even discovered a sugar-free version. I’ll have to drop a hint to my Valentine.